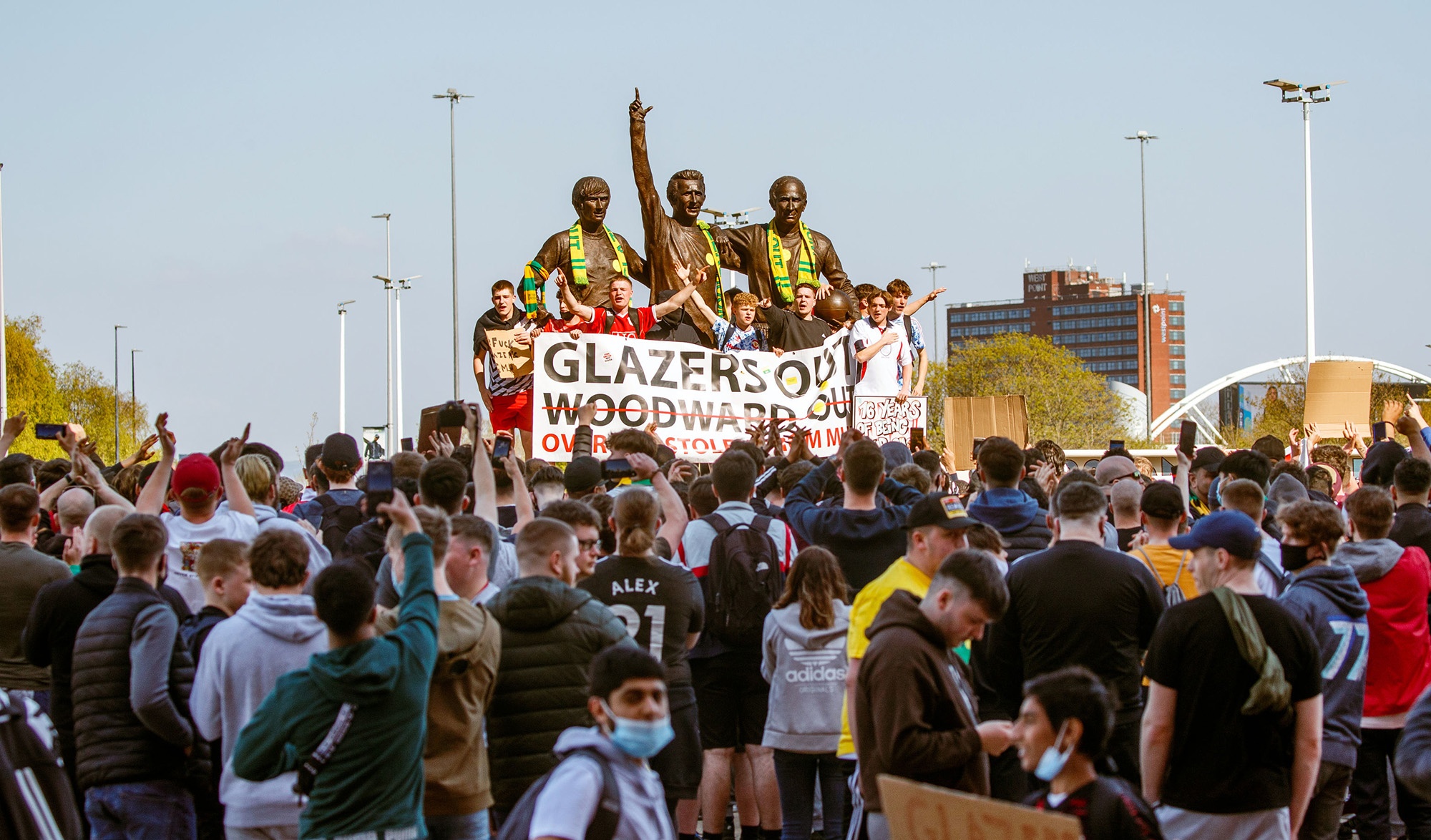 Manchester United fans stormed Old Trafford for the first time in almost two years, not to watch football but to do exactly the opposite

More than 5000 fans were outside the Old Trafford to protest against the Glazers before the Premier League game against Liverpool. The fans managed to give them the day they will never forget, they made sure their voices were heard this time.

European Super League might have sparked the sudden uproar but the fans have always been unhappy with the owners. With the amount of debt incurred upon the club is not only eye opening but also scary.

They might look like the angry mob on the loose but the frustration of the fans is the result of constant money laundering and the undue advantage the owners have been taking over the years.

In Feb 2010 United fans came out in Green and Gold during the Carling cup finals at Wembley to stand against the Glazers, the first colour-coded football rebellion.

The United side of the crowd looked Green and Gold instead of usual Red and White, the green-and-gold theme harks back to Newton Heath, the club founded in 1878 that then became Manchester United in 1902.

Let’s take you to the journey of Glazer’s Daylight Robbery: Swiss Ramble has thoroughly explained in detail the finances of the club and how the Glazers are sucking money out of the club for their own benefit.

The Glazer’s took control over the club in 2005 via a £550m leveraged buyout: the Glazers would not put a cent into United, but would want fortunes out.

Operating profit of £467m was improved to £2.0 bln operating cash flow via two adjustments:
(a) adding back non-cash items such as player amortisation, depreciation and impairment £1.3 bln.
(b) movements in working capital £210m.

The interest on £236m “payment in kind” (pik) loans taken on for the takeover had reached 16.25% five years later; £67m had gone out of the club in interest alone in 2009-10, when they refinanced, costing the club another lump of multimillion-pound fees.

In 2015 the club announced that shareholders would be paid a dividend every year, and they have been: approaching £100m paid to the six Glazer siblings since then.

In the most recent financial year, to 30 June 2020, which includes the early months of the Covid-19 shutdown, United’s revenues fell by £118m, and the club made a loss of £23m – but still paid the dividend, itself amounting to £23m.

The Glazers have put nothing in during 16 years of ownership, but their corporate schemes have drained out more than £1bn.

United had £1.0 bln net spend on players (purchases £1.4 bln, £0.4 bln sales), but spent almost as much (£704m) on interest on the loans taken out by the Glazers. Only £185m was spent on infrastructure (stadium and training ground). Cash flow before financing was therefore £57m.

Mufc also spent £244m on loan repayments and £125m on dividends. As a result, the club ended up with a £14m net cash outflow.

Where #MUFC are in a league of their own is interest payments, which add up to a staggering half a billion pounds since 2010, which is more than all the other Premier League clubs combined. The next highest is #AFC, whose £140m pales into insignificance compared to United.

If you think that the interest payments are bad, wait until you look at the dividends.
£122m (around £23m a year in 2020) is again by far the highest. In fact, they are the only Premier League club currently paying dividends.

A majority of the fans had banners of 50+1 who want to see the fans have the majority shares of the club, which the German club follow.

If that’s not enough, the club have also had to pay another quarter of a billion pounds on loan repayments since 2010, again the highest in the Premier League, ahead of #AFC £211m (and the Gunners have new stadium to show for it). #THFC £756m is mainly to fund their new ground.

The harsh reality is that after all the Glazers financial engineering, the club still have £526m debt, which is the second highest in the Premier League, only “beaten” by #THFC £831m. Therefore, the draining of the club’s resources will continue for the foreseeable future.

The Glazers have only looked at the club as a cash cow, spending majority part of the profit on the interest payments and filling their pockets through dividends.

Whereas if you see our rival teams like Man City, Chelsea have seen an overall significant growth and have invested heavily in building a strong team and infrastructure.

The most concerning part about all these finances that it shows there’s no way the Glazers will be able to sell the club at the price they are quoting even if they wish to sell the club.

What are your views on this topic? comment down below.