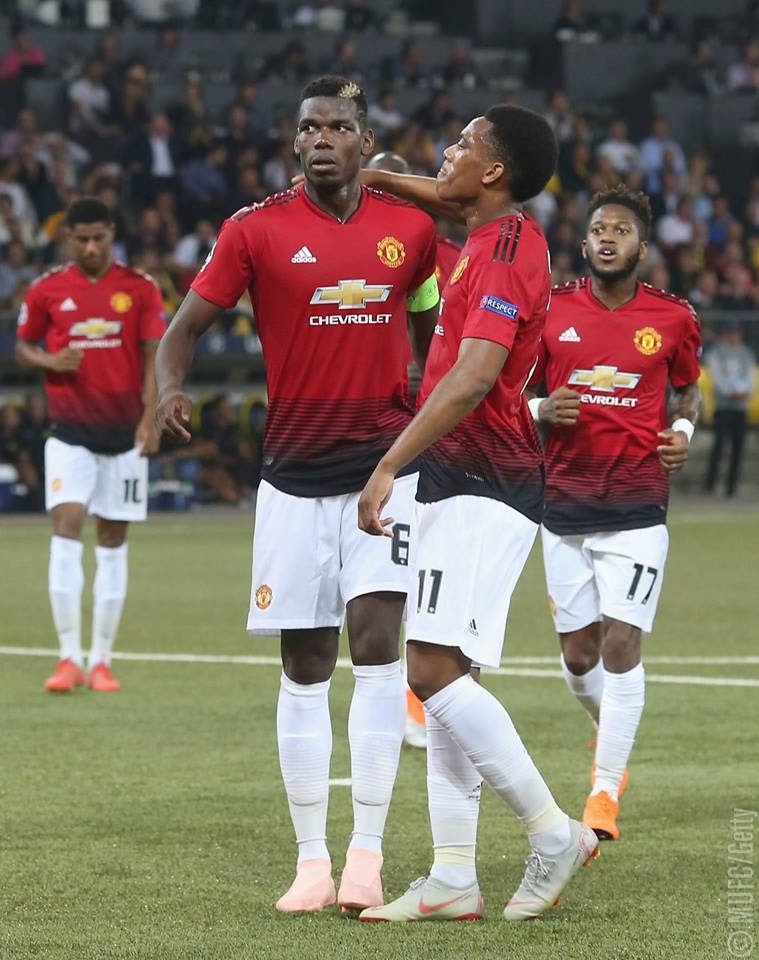 Manchester United are sitting on the top of the group H after comfortably winning the game against the Swiss boys.

Pogba silenced the doubters scoring twice (which includes a cool penalty) and assisting Tony Martial (who had goal drought since January) in the 66th minute. The Young boys were in charge and almost took the lead in the 8th minute but Guillaume Hoarau’s header went wide off the post.

United took time to settle and get in control of the game, soon after 35’ minutes of goal draught Pogba showed his left foot strength that sent the ball right in the top corner. The visitors were awarded with a penalty after Kevin Mbabu’s hand contacted Shaw’s cross sending Jose Mourinho’s men into halftime leading with two goals.

The Reds began the second half comfortably, keeping the possession for long periods giving no chance to the hosts to make a comeback. It was all over for the Young Boys when Anthony Martial Scored the consolation goal for the Reds 65′ minuted in the game. The boss made a few substitutions after the 3rd goal.

Not a very great performance but job was done.

“Job is done. It wasn’t phenomenal, but good enough. I’m happy. I can understand the reasons why we didn’t start well, why we took 25 minutes to be in control, I can see why Young Boys forced it a little in the beginning. They did the same against Dinamo Zagreb too. They know how difficult it is for opponents on this pitch, so they forced it a little and created problems. The goal changed this and then we were in control. It’s important to start with a victory.”

“I think Diogo and Luke played very well – our danger came from both. They had fantastic movement, depth, crosses, assists, involved in the most dangerous actions and defended very well. Both played very well but of course Luke has been here for a few years, while it was Diogo’s first match for the club after knee surgery. I think it was a solid performance – you could see his potential. He’s a 19-year-old defender with more than 10 years to play for Manchester United.”

“After training yesterday, and it was only light training, I had some players who were feeling their ankles or backs. They were sore. It’s not easy, especially for people that are not adapted to it, so I think there was also a bit of fear in the duels. People are more used to playing on great surfaces in England with always water, if not rain. The clubs, they provide the water and the football is much more beautiful that way. Now I can say because the game is over, I don’t understand how you can play the best club competition on an artificial pitch.”