How Bruno Fernandes has impacted Manchester United’s game since his debut.

How Bruno Fernandes has impacted Manchester United’s game since his debut.

United’s biggest January signing has had a huge impact on Manchester United since he joined the Red Devils.

A lot was expected from his arrival,  but who would have guessed this Portuguese wonder boy would set fire the moment he stepped foot on the pitch.

He has won 7 Man of the Match awards in 16 games and 2 Premier League player of the month award since he joined in January, he becomes the seventh player in history to earn the prize twice in a row.

The Red Devils were 10 points off from then third-place Chelsea in Oct 2019, fast forward to now,  now we are competing with them for the third and fourth position along with Leicester City with just a point separating them from Leicester and us.

Ole’s army took only 34 points from their first 24 games, after Bruno’s arrival the win ratio doubled and they have not lost a single game since, stretching the winning streak to  19 games. This run was halted by the 3-1 loss in the FA Cup SemiFinal to Chelsea.

Since making his debut, United have sealed the joint-most points (18), scored the most goals (15) and conceded the joint-fewest goals (2) in the Premier League.

Manchester United have continued their winning streak after the Premier League resumed and Bruno has been quite influential. 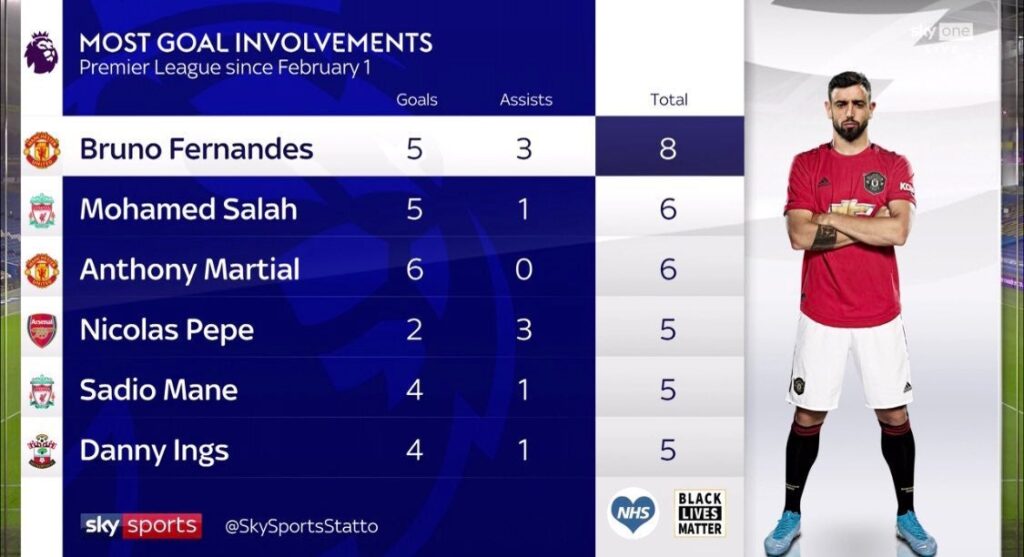 United have played 11 PL games with Bruno and took 25 points, lost 0 games. A better stat than Liverpool who has taken 23 points and has lost 2 games in 11 PL matches.

The biggest transformation United has ever had after signing a new player, even Robin Van Persie has been left behind, Burno (14) has overtaken Robin Van (12) Persie’s first 11 games record of most assists and goals.

His arrival has also impacted the number of goals scored, United scored 36 goals in 24 matches before him, and 20 in nine matches since.

United have also managed to concede 36% fewer goals per match than previously, they conceded 24 in 29, and afterwards, the nine games in the league he has featured they have let in just four.

Bruno has also improved the players around him, with him handling the midfield Anthony Martial, Rashford and Greenwood have the freedom to attack, our linkup play between Bruno and our front 3 is so promising and every MUFC fan will be looking to see more of these 4 play together in the future.

Pogba has also been a completely different player since the restart and looks  happy and confident to share his workload with him. They have not played a lot of games together, but the signs are very promising

Do you think he will manage to take United to the Champions League?

The new season has started and we are looking back at the greatest summer transfers. Here are the TOP 20 transfers across the top Leagues. (2017)