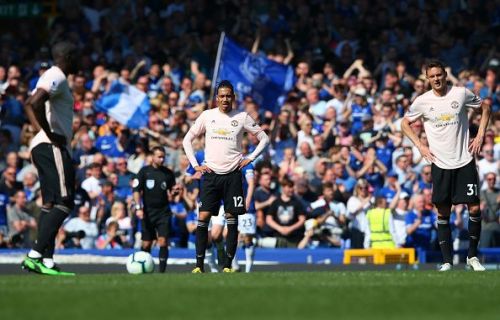 Wayne Rooney received a warm appreciation on his return to OT but it all ended in disappointment as his club faced an ugly defeat at the hands of Manchester United. Antonio Valencia’s 4th min’ goal gave the reds a perfect start but had to wait till 83rd min’ for the second goal.

Valencia smashed a powerful half-volley past Everton goalkeeper Jordan Pickford in the 4th min of the game to take United ahead.

United continued to attack and almost doubled the score when Juan Mata collected Michael Keane’s casual pass but it went out hitting the side post. Lukaku had clear chance running with ball from Rashford but was cleared by Jagielka who slides in successfully

The Reds had to struggle in the second half as Rooney had a clear chance who had only De Gea in front of him but his left footed shot was saved by his former team mate.

Mkhitaryan slotted home within seconds of Rooney’s departure and then Lukaku fired home against his former club before Martial’s stoppage-time penalty wrapped up a comprehensive victory.

Henrikh Mkhitaryan, Romelu Lukaku and Anthony Martial all netted after Rooney’s exit to condemn Everton to a fourth successive defeat in all competitions.

It was a good end to the game for Manchester United.